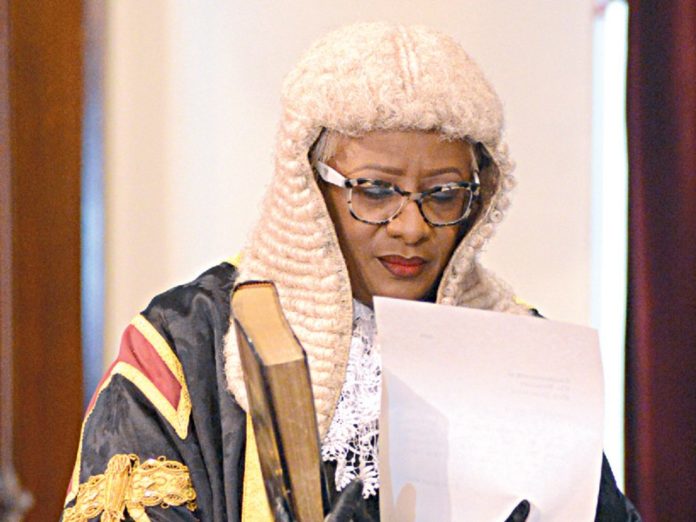 Kay Forbes-Smith has resigned her role as President of the Senate.

Her resignation was effective immediately.

“I wish to thank Kay for her service as President of the Senate and I wish her the best in her new role,” Prime Minister Minnis said on Sunday. “Kay has tremendous management experience and has also served overseas as a diplomat representing The Bahamas.

“After Hurricane Dorian, Kay agreed, on a voluntary basis to serve as the NEMA Grand Bahama Coordinator. She helped to organize relief efforts to residents of Grand Bahama and coordinated the efforts of multiple ministries and dozens of NGO operating on the island.

Prime Minister Minnis pointed out that because of Kay’s background and professional experience, she also appreciates the importance of communicating the work and progress of the Authority to the Bahamian people, various stakeholders and the press.

Kay is no stranger to leadership. She’s held so many leadership roles throughout her career and has a diverse background with significant leadership experience in the private sector. They include holding senior management positions overseeing functions including human resources and training, business and economic development, public relations and marketing and corporate affairs.

Since stepping into the role of NEMA coordinator a week after Hurricane Dorian had passed through Abaco and Grand Bahama, Smith has been under attack by the Opposition Party on what they called “a conflict of interest” as NEMA’s Coordinator and as President of the Senate.

“The Progressive Liberal Party believes it is improper for Mrs. Forbes-Smith to simultaneously preside over a legislative body and work for the executive,” said Philip “Brave” Davis, Leader of the Official Opposition.

Davis said that Smith was already in controversy because of her links to a commercial venture in Freeport, which requires government approvals.

Davis was referring to Smith’s PR Agency involved in working for Carnival Corporation, who plans to construct a cruise port in East Grand Bahama. However, Smith did not respond to Davis’ comments, and continued to work for NEMA as lead coordinator.

Evidently, with the appointment of this new post, the Prime Minister is trying to avoid any appearance of controversy and as such, Smith has been asked to resign as Senate President in order to take up the new role of Managing Director of the Authority.

Kay’s resignation as Senate President leaves room for the election of a new president.

“Because of a vacancy in the Senate, I am pleased that on my advice, his Excellency, the Governor General has appointed Lisa Bostwick-Dean as a new senator,” said Prime Minister Minnis.

Mrs. Dean was sworn in as the new senator on Tuesday, December 3, 2019 at Government House. The other members of the new Authority is expected to be announced at a later date.

The Act provides for a Board of Directors of the Authority.

“I wish to announce that Mr. John Michael Clarke will serve as Chairman of the new Authority and that Mr. Algernon Cargill will serve as vice-chairman,” said Prime Minister Minnis.

“I thank both of them for agreeing to serve in these capacities and for their work in the aftermath of Hurricane Dorian.”

It’s not the first time that Algernon Cargill has been appointed a position in Hurricane relief. Early in September, Cargill was appointed as a Board Member for Hurricane Relief in The Bahamas. Even then, the Opposition opposed his appointment, saying that the Prime Minister made a mistake in Appointing Cargill to the Board.

“He invites controversy and adverse commentary due to his previous role in the service,” said Davis in a press statement.

“We are of the considered view that these appointments have added an unnecessary layer and so elevated the level of bureaucracy that the process of relief and recovery will be significantly slowed down from getting to those who need it, bring political considerations into the relief efforts and will simply spread confusion.”

The leadership team for the new Authority will work with newly appointed Minister of State for Disaster Preparedness Management and Reconstruction, Mr. Iram Lewis to continue the reconstruction program for Grand Bahama, Abaco and the Abaco Cays.

The Authority will be responsible for the management of reconstruction and restoration in areas designated disaster zones. It is also responsible for establishing criteria, procedures and processes for transitional housing, services and assistance.

The functions of the Authority are:

“The Authority is empowered to establish the Bahamas National Recovery and Reconstruction Trust Fund and to provide for the appointment of its Trustees,” said Minnis.

“This Trust Fund will be an independent and non-political body to help fund home and building repairs. We must create a public culture that is accountable and transparent with hurricane relief funds and that scorns on corruption and fraud.”

In disaster zones, the Authority will serve as the focal point for liaising between the government and international contributors to coordinate and provide oversight of international disaster assistance.

In putting to rest the speculation as to whether or not the Authority or the new Ministry will replace NEMA, the Prime Minister added that the Authority will collaborate with the National Emergency Management Agency (NEMA) in carrying out its functions under the new Act.

Is the Bahamas ready for full fledge digital banking?