Home Editorial The Making of a Politician: Compassionate, Committed and Charismatic – Glenys Hanna... 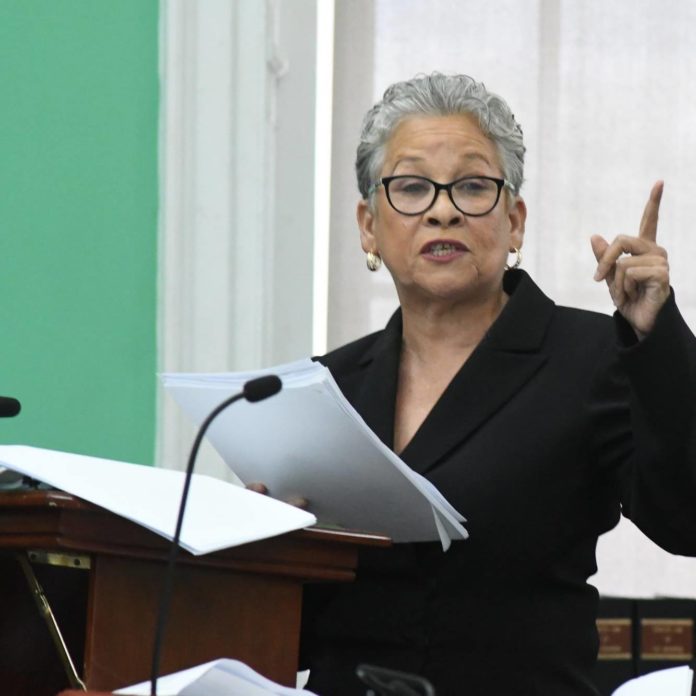 In our previous examination of who is fit to lead us in the new normal Bahamas, we listed three qualities absolutely necessary to be considered. We said that our Prime Minister, whether he be the same or someone new, must 1. be a unifier; 2. possess a bold vision for development, Bahamian driven and internationally supported, and; 3. inspire the creative genius of Bahamians to play a more empowering role.

The Most Honorable, Prime Minister Hubert Minnis must be reading, given his invitation in the House of Assembly on July 23, to the Opposition leader to join his Cabinet in a specially convened briefing. The Hon. Philip Davis, obviously poorly advised, declined. In a statement by the Chairmen of the Progressive Liberal Party, supporting the Opposition Leader it was noted,

“Earlier today, the Prime Minister issued an impromptu invitation to the Leader of the Opposition to attend a Cabinet briefing on Covid-19 this evening. It is regrettable that the invitation was issued at such short notice that it is not possible for the Leader to attend.

However, as he has done on several previous occasions, the Leader of the Opposition has requested that the Prime Minister arrange a full briefing on the Covid-19 crisis by the Government’s Task Force for the Leader and his PLP Parliamentary Colleagues, at their earliest mutual convenience.”

Sadly, on both sides of the political divide we are witnessing that ego is too often stronger than best practices for the nation. Certainly this is normal behavior among persons in Bahamian political limelight. These characteristics, some might argue, have made our leaders more colorful, and at times entertaining. It conjures up images of two strong lions fighting to be king of the jungle. Challenges to ego among our leaders give onlookers occasional opportunity to see who appears to emerge stronger.

But during a crisis, the Pride could care less about petty squabbles. They hunger for no-nonsense unified leadership. They need to know that there could be a coming together for survivability. They need to know that there are moments in the jungle when leaders will guide them over obstacles to greener and safer pastures. The Bahamian people, like most of the world are in dire need of this unified effort at the moment, as the grass withers, and the brooks dry up, and food and safety are scarce.

House of Assembly proceedings were indeed interesting all around this week for Prime Minister Minnis. In addition to failing at his attempt to reach out to the Opposition leader, he very discreetly back-pedaled on his position to restrict commercial flights from the United States from entering our borders. It is apparent that since his initial announcement he ran into international treaties, and no doubt personalities, which pointed out breaches in his reasoning. The Competent Authority was quite sneaky in his reversal of his position and the passage of the orders. It took the press and concerned Bahamians almost 48 hours to uncover and share that commercial flights from the U.S. are very much still welcomed to our shores.

It would be the Prime Minister’s frustration with Bahamians, in their role of the heightened spread of the Corona virus, which would get him in hot water, however. His language of blame and shame drew rebuke from the Opposition’s most fiery and unrelenting member, Hon. Glenys Hanna-Martin. She was like a mama wailing the behind of an intruder, caught compromising the sanctuary of her children. She beat up on the Prime Minister for minutes on end, with a cat-o-nine tail style oratorical tirade normally reserved for a particularly mischievous delinquent. Here are some of her words:

“ ….the people in Arawak Cay were shut down for months, they’re shut down again. So we all understand that we’re dealing with something…. and we do not need the leadership on this issue to speak to our people in a condescending tone ….. and I don’t appreciate a condescending tone when our nation is in a crisis. I want the Prime Minister to speak to his people like he’s talking to intelligent people, who know we’re facing something serious….I’m wondering whether that’s the premise he starts from… that we have sense, in this country? We know what we’re going through… we have a curfew every night….

… so I want to urge the Prime Minister, as the competent authority, that in his conversations with the Bahamian people, to speak to us as intelligent participants …. and you know, we keep hearing a shifting rationale… when we were doing well …. it was them, they did it …they did the good things …. now we have some failed situations, and it’s the Bahamian people ….”

So just who is this freedom fighter who proclaimed that she would die for her country, a few days ago in Parliament? Well we know that she’s an apple that hasn’t fallen far from the tree. The daughter of the first Deputy Prime Minister of an independent Bahamas, and the soul of the movement to majority rule, Glenys is the continuation of her daddy’s fearless commitment to representing the downtrodden in our Bahamas. It was her father, Hon. Arthur D. Hanna, who also served as Governor General in his latter years, who adopted the biblical phrase that the work of the PLP will not be done until, “we have wiped every tear from every eye.” And Hanna’s believe this with an unwavering conviction.

Glenys was drafted by the Rt. Hon. Perry Christie, former PLP leader and Prime Minister, shortly after he became captain of the Party in 1997. Political royalty, she was identified as a candidate for a sure seat in the 2002 general elections, and also asked to lead the women’s branch of the Party, to rebuild that arm, and to develop her platform. Englerston, in the heart of the Over-the-Hill communities of Nassau, was and remains an historically PLP constituency. Despite almost 90% of her colleagues falling in the last elections, Glenys held her seat, and for a few months, was the leader of Opposition business in the House of Assembly.

Hanna-Martin is an incredibly humble, and hard worker. Even with the majority of her constituents’ income levels at or below national household statistical averages, Glenys immersed herself in the welfare of her people. She genuinely cares, about the education of young people, employment for anyone and everyone who wants honest work, for the ability of residents to have access to hot meals, and basic amenities, for elder care, and for the constitutional rights of the very least among us. She has brought her career as a lawyer, and her creativity through the love of language and literature to her role as a Member of Parliament. And she’s just an honest and altruistic human being who will not back down from a good fight.

Without doubt, she has had her share of challenges as a woman, and a female politician. There is a faction in the PLP who never got over her being gifted with the safe seat. And when she was elected as the first female Chairman of the PLP, in fact, any major political Party in The Bahamas, she galvanized the energies of most but as with all called to leadership, she sometimes offended the few patriarchal figures who still believe that women should know their place. And she is a real woman, a mother and now grandmother, a wife who buried her husband under difficult circumstances, and balanced in the vanity of femininity. As trials have come, she has never taken a break from her dedication to country or the work of serving her people.

There are mixed views on whether Glenys Hanna-Martin should have challenged, PLP Leader, Brave Davis, at the first convention after the retirement of Perry Christie. There were failed last minute attempts to get her to settle for Deputy, not just to ensure her role in the leadership hierarchy of the Party but to heal a growing rift in the organization. Her defeat only more deeply divided the Party, now hoping to ride into victory on polls which highlight the discontent of Bahamians toward the sitting government. Hoping that the FNM loses is not the best strategy at pulling off a win.

It would therefore, be wise that Opposition Leader, Mr. Davis, elevates the Hon. Glenys Hanna-Martin to the prominence she deserves in the House of Assembly, again. He should also unleash her very determined and deliberate passion for Bahamians needing, especially now, that kind of voice in these uncertain times. We have no idea what the immediate future holds for Bahamian leadership, and that of the PLP. We are not in a position to rate Brave Davis or Hanna-Martin just yet, on, the ability to unite, vision, and inspiring the ordinary majority. But we do know that hers is a voice and disposition that should not be ignored or discounted. And the fact that she is still there proves that she has more work to fulfill on the quest to drying tears from the eyes of  Bahamians, at present in the test of their lives.