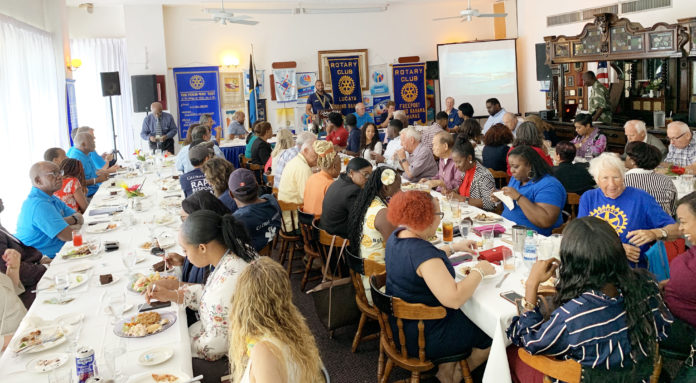 The Rotary Clubs of Lucaya, Freeport, Sunrise, Sunset and Grand Bahama converged Tuesday for a special meeting to hear all about how the $1.3million raised for relief efforts in Grand Bahama post-Hurricane Dorian was utilized over the last five and a half months and immediate plans for the way forward.

Rotary was one of the first responders to hit the ground after Hurricane Dorian devastated the island and continues to play a key role as a non-government organization (NGO) in bringing recovery and restoration to Grand Bahama.

The special meeting was held in the form of a luncheon at the Ruby Swiss Restaurant where Rotarians from the five clubs on the island and special guests, which included, volunteers, other NGOs like GlobalMedic, Rotaract and members of Rotary District 7020 who serve on The Bahamas Disaster Committee, were treated to a collage of photo and video presentations of the relief work carried out to-date.

Area Governor of Rotary District 6990 for Grand Bahama Lisbeth Knowles said it was important to bring everyone together and recognize all of the hard work of so many who have been involved in the massive undertaking which got underway immediately after the storm passed.

“We’ve been working so hard, Rotarians and a lot of volunteers, and we want to show what has been happening since day one since the hurricane devastated our beautiful island,” Knowles said.

From providing fresh drinking water via Rotary’s reverse osmosis water plant, to opening distribution centres filled with donated goods such as food, clothing, toiletries and other essential relief supplies throughout the island, to delivering generators, gasoline and building materials to hundreds of residents, Rotarians were updated on how the funds have been spent.

“We have received about $1.3 million so far – $700,000 here on the island and $600,000 through the Robbins Fund, through our district they have collected from Rotarians and districts in Florida and around the world,” she said.

Thousands of homes were compromised by water as a result of the 20-plus foot surges. As part of its mold remediation program, Rotary teamed up with GlobalMedic, a rapid response agency based in Canada, Town and Country, a local maintenance company, which specializes in treating mold and Team Sea Grape, a volunteer group of young men which offers gutting and mucking services.

“We have been mucking, gutting homes and mold remediation and giving supplies and we have been helping senior citizens put up the sheetrock in the Hawkbill area and Hudson Estate, Regency Park and other areas here in Freeport and we are going over the bridge now. It seems like they have been a little forgotten over there, so we try to help out as much as we can,” said Knowles.

In East Grand Bahama, Rotary has established distribution centres in Free Town, High Rock, Pelican Point and McLean’s Town and to-date assisted in the repair of about 100 roofs in the east and 300 in Freeport.

Rotary 6990 District Governor Ray Williams travelled from Florida for the special luncheon and became emotional as he thanked the Rotarians, NGO partners and volunteers for the exceptional work that they have done over the last five and a half months.

“They have done such a remarkable job. The leadership we have here, my AG Liz and the rest of the AG team, the club presidents and everybody’s pooled together to just make an incredible impact on Grand Bahama and try to get the relief effort really working,” said Williams.

“As you probably know, our first efforts were to get relief supplies over here, but that was at the front end, then we’ve converted over into trying to help rebuild. We were trying to find people who we can help get them into their houses so it’s a place where they can live again.

Rotary International President Barry Rassin also flew in from New Providence to express his gratitude to his fellow Rotarians.

“The amazing thing is that Grand Bahama, the five clubs here, you have done an absolutely outstanding job. You made me proud to be a Rotarian. When I travel and I can tell what’s happening in Grand Bahama it makes me proud in front of Rotarians,” he said.

Rassin also wanted to convey a special thank you to the many local and international NGO partners.

“They have been on the ground from day one. From the US Military, the UK, the Dutch, I mean the world has come and said, Bahamas we’re here to help, and they have done an enormous job to help us and I hope they all hear this message because we’re thankful to all of that international help that we got. We always will be.”

Tourism numbers up in The Bahamas first quarter

Decommissioning of the Bahamian Penny: Is this the right decision or another form of...

Q. Has COVID-19 threatened the nature of Bahamian Independence?