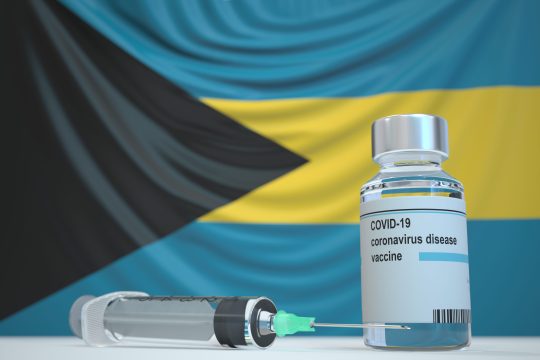 NASSAU, The Bahamas– Public Health Nurse Ruth Bastian became the first$
person to be inoculated with the COVID-19 Vaccine, as The Bahamas Government rolled out its phased vaccination plan.

Ministry of Health officials utilized Loyola Hallon Gladstone Road, where
the first shot was administered to Nurse Bastian at 10am.

Nurse Bastian, who has been attached to the Immunization Unit since 2009,
has also spent quite a number of years in the public health system working
at Sandilands Rehabilitation Centre, and on the Family Islands of Andros
and Eleuthera.

Dr. Merceline Dahl-Regis, Special Health Adviser to the Prime Minister and
chair of the Consultative Committee received the second shot of the
COVID-19 vaccination.

Prime Minister the Most Hon. Dr. Hubert Minnis and his wife, Patricia, are
also expected to be among the first individuals to be vaccinated.

Archdeacon Keith Cartwright was present at this first inoculation, and
delivered prayers and blessings.

The vaccine shots administered Sunday were from the batch of 20,000
Astra Zeneca vaccine – also known as Covishield – which The Bahamas
received from the Government of India on Wednesday, March 10,2021.

The vaccine was pre-qualified by the WHO and received Emergency Use
Listing (EUL) approval by the WHO. The vaccine has also received
certification from the Caribbean Regulatory System (CRS).