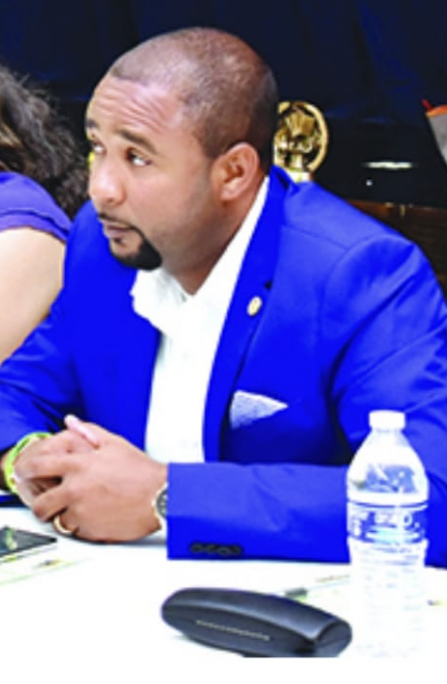 The Compass with our special feature is highlighting the best and brightest of our your leaders today Follow us each week as we shine an ever so bright light on each of them. Don’t be shy leave a comment below and tell us what you think.

Darren Cooper. He is known all around the island with these many hats that he wears, he is looked to, and looked up to, but most of all he is what you would call a change agent.

Change agents are never afraid to speak out against injustice or to lend their voice to the voiceless and since the tender age of 12 years old, proprietor and community activist Darren Cooper continues to champion the cause of the downtrodden throughout the island of Grand Bahama

A beloved son of the Hawksbill community, Cooper loves being involved in events focused on assisting the growth and development of his neighborhood socially, spiritually, and economically.

Due to his impeccable work ethic, it was not long before he was noticed by former Free National Movement (FNM) Members of Parliament for Eight Mile and West End and Bimini the Honorable H. Lindy Russell and Hon. David Wallace, respectively, who took Cooper under their tutelage and began grooming him to become a well-rounded community leader through the West Grand Bahama Youth District Association (WGBYDA).

According to Cooper, “During that time both Min. Russell and Min. Wallace had a vision for the youth, which involved us taking a more fervent stance in community building and as such, they created WGBYDA throughout the communities under their purview.

“I was a member of and the youngest serving president of the Hawksbill Youth Association (HYA), which was responsible for organizing and operating summer camps, community clean-ups and engaging our youth in positive activities.”

Noting that he served as president of HYA for a period of three years, Cooper said it was not long before he joined the Hawksbill Association where he served as an advisor under the presidency of Harold Williams before being asked to serve for a period as the acting president.

Again, Cooper was engaged in community building activities that included but was not limited to clean-ups, senior citizen care and hosting town hall meetings to discuss pertinent issues and devise a way forward beneficial to all concerned.

Although he had no aspirations of becoming a politician, Cooper was well on his way and due to his love of people particularly children and the elderly, he noted it was imperative for him to speak out on issues he felt deserved focused attention, insight and resolution, which at times did not correlate with the modus operandi of Government leadership of the day.

Admittedly, Cooper revealed that speaking out on behalf of people who are timid by nature or afraid of being victimize can be difficult but it is a price he is elated to pay for the betterment of all concerned.

“Undoubtedly, I have been penalized for my outspoken nature especially in the face of injustice however, despite this I believe God has given me the boldness and wherewithal to do what is necessary to help my people.

“Truthfully, I cannot be silent on issues that I know is creating pain, suffering and setbacks for the average citizen and business owners and hold our leaders responsible while undergoing proper assessment and rectification initiatives,” Cooper declared.

Grand Bahama is Cooper’s home and he believes more should be done by the government and those in authority to improve the economic state of the island and ensure business for Bahamians is made easier so that wealth would be common among the citizenry.  You would often hear Cooper say, “ I believe in my country”, I believe in small business in Grand Bahama, when they win Grand Bahama wins’.

Cooper through his Rotary club is committed to build one community back at a time, sacrificing of his own time, and often times finances, to help Grand Bahamians.

Furthermore, while he never desired to be in frontline politics he understands that in order to be a true agent of change he has to move out of the realm of activism and become a political leader, who not only speaks truth to power but has the power to make positive, sensible changes for the good of the Bahamian people.

Cooper, who is well on his way to be coming a dynamic political leader encourages his peers and generations to follow to be true to the cause of the Bahamian people, never sellout, fight for the rights of all concerned as well as for what you believe in respectfully and continue to build upon the success of their forefathers for the better of the Bahamas.

“Please be sure to glean from the wisdom of the elders and use the strength of the youth to move this nation forward and if becoming a political leader is your calling do so with integrity, courage, loyalty to country and faith in God, as we can only move forward, upward and onward together in love and unity,” declared Cooper. If there was a mold of leaders in this Bahamas, Darren Cooper will definitely fit it.