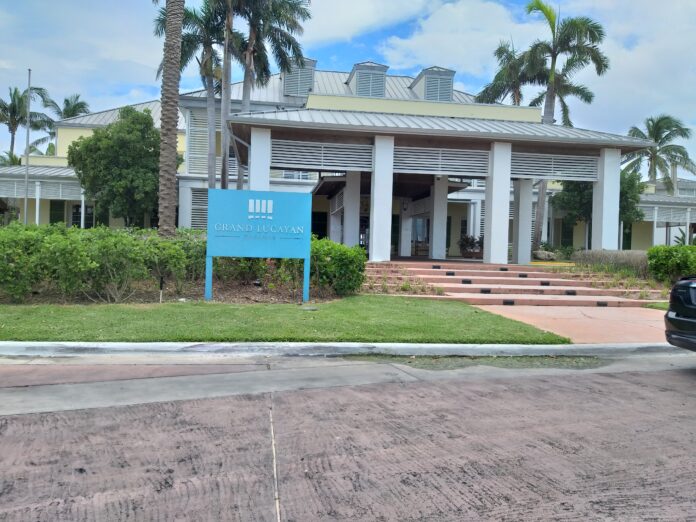 During his latest visit to Grand Bahama Prime Minister the Hon. Dr. Hubert Minnis assured residents of the Grand Bahama community that the government remains focused on the island’s economy.  He expressed this during a recent press conference at the Office of the Prime Minister in Grand Bahama.

“We remain much focused on Grand Bahama. We know the economic struggles you have endured for many years,” he said.

The PM furthered that some of the largest economic concessions were provided for the residents of Grand Bahama and Abaco following Hurricane Dorian.  They were both declared Economic Recovery Zones.

“We continue to work hard to rejuvenate Grand Bahama,” he said.

“I am pleased to report that we remain positively engaged with our development partners on these Projects,” he said.

He added that they remain committed to the implementation of these Projects, which he will have more to updates about in the weeks ahead.

The Government signed a Heads of Agreement with Hollistica, a joint venture between Royal Caribbean Cruises and the ITM Group, to purchase the Grand Lucayan property for $65 million on March 2nd, 2020.

The $250 million investment by Royal Caribbean and ITM Group is a major aspect of the government’s plan to revitalize the island’s economy.

PM Minnis previously said 3,000 direct and indirect jobs will be created through the investment.

The Government purchased the property as an investment from former owners Hutchison Whampoa in September 2018 at an overall cost totaling $65 million.

A Letter of Intent (LOI) was signed last March between Lucayan Renewal Holdings, the Government of The Bahamas, Special Purpose Vehicle (SPV) and Royal Caribbean Cruise Line Limited (RCCL) for the intended purchase of the mega resort and the redevelopment of the Freeport Harbour along with RCI’s partners, the ITM Group.

Prime Minister Minnis also informed that the government is also continuing discussions with Hutchison Ports along with the Grand Bahama Port Authority to finalize an agreement on the best way forward in rebuilding a world-class Grand Bahama Airport.

“Indeed, we are preparing the entire country for reopening and rejuvenation post-COVID-19,” he said.

Just last week the government signed the Heads of Agreement for the $400-million-dollar Jack’s Bay development for South Eleuthera, which is a Bahamian-owned investment.

The PM furthered that the Government also remains committed to providing emergency food assistance during the pandemic.

The Grand Bahama Food Task Force through the Feed Grand Bahama program continues to assist those who are in need in the community.

“I am advised that this program has distributed over 12,000 vouchers to thousands in need totaling approximately $1 million dollars,” he said.

He explained that the Department of Social Services in Grand Bahama and The National Insurance Board in Grand Bahama have made significant payouts to residents affected by Hurricane Dorian and COVID-19.

“We continue to invest in critical infrastructure to improve the lives of Grand Bahamians; $4.5 million in contracts were awarded in June 2020 for major reconstruction to 15 schools on Grand Bahama.  $21 million has been allocated for the phased redevelopment of the Rand Memorial Hospital,” he said.

PM Minnis stated that work is steadily progressing with demolition, new construction, additions, and renovations.  The Fishing Hole Road Bridge has been completed and officially opened.

He acknowledged that while the government is making progress on Grand Bahama, there is still much to do.

“COVID-19 may have delayed our ambitious and comprehensive plans for Grand Bahama.  But once we have beaten back this virus, our plans will come into full force,” he said.