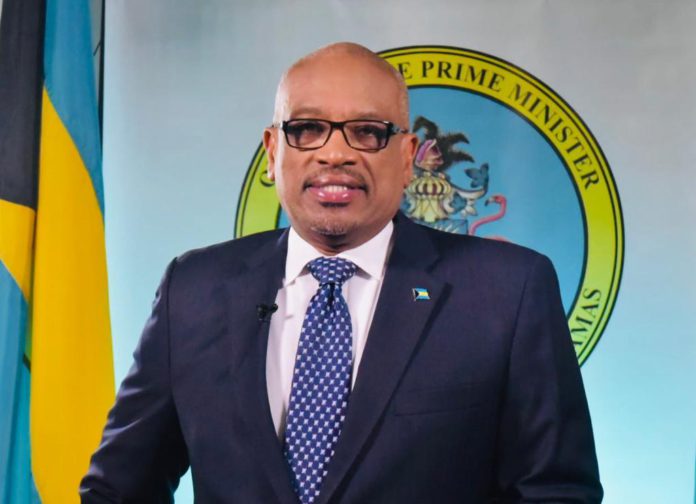 “Despite the twin economic catastrophes of Hurricane Dorian and the Covid-19 pandemic, the Bahamian dollar remains as strong as it has ever been.”

This is the evaluation of the strength of the Bahamian economy by Prime Minister Dr. Hubert Minnis, during the 2020/21 mid-year budget statement in the House of Assembly on Wednesday morning. He pointed out that the Mid-Year Budget Statement was presented at an unprecedented time in modern Bahamian history; a time when The Bahamas is still rebuilding from Hurricane Dorian and during a time when the country continues to contend with the persistent threat of the COVID-19 pandemic.

“Hurricane Dorian was the most devastating storm in our history and COVID19 has been the most harmful pandemic in modern history,” said Dr. Minnis. “It is therefore not surprising that in its most recent assessment of The Bahamian economy, in November 2020, the IMF estimated that the Bahamian economy contracted by 16.2 percent in real terms in 2020, representing the most significant economic downtown in any single year in Bahamian history.

“However, in line with the anticipated improvement in global economic conditions in 2021, in the context of the vaccine rollout, which will support a recovery in tourism, the U.S. real GDP for the Bahamas is expected to rebound by 2.0 percent and strengthen to 8.5 percent in 2022.

“I am fully confident that, although these two recent shocks have delivered a hard blow, we remain resilient. We are still standing and we will emerge even better and stronger!”

Because the presentation surrounded a mid-term financial accounting, the Prime Minister unraveled the provisional revenue and expenditure of his government for the first six months of the fiscal year and the outlook for the remainder of the year.

He admitted that balancing the priorities of saving lives, rebuilding two islands and maintaining the Bahamian economy did not come without its challenges. He pointed out that during the first six months of the 2020/21 fiscal year, total revenue contracted by an estimated $415.3 million to $673.4 million 27 when compared to the same period last year. That amounted to 38.1 percent of the full year budget estimate.

“When we take a closer look at the components of this revenue, we understand the following: Firstly, collection of taxes contracted by $425.0 million to $568.5 million. This is largely driven by reductions in VAT collections of $228.9 million to $286.4 million, lower intake from international trade taxes, by $128.7 to 28 $103.2 million and excise tax reductions of $43.6 million to $88.9 million.

“Secondly, the reductions are largely a result of the reimposition of certain COVID-19 health and safety measures as the country experienced its second wave resulting in a slower than anticipated economic recovery and consequently lower government tax receipts.

“Thirdly, the extension of the government’s Special Economic Recovery Zone (SERZ) program to December 31, to allow persons in Grand Bahama and Abaco to continue to rebuild in the aftermath of Hurricane Dorian, also – as anticipated – had the effect of reducing government tax revenue. Also, non-tax revenue, however, improved by $9.9 million to $103.9 million supported by an increase in rent revenue of $11.9 million 30 attributed to the timing of the AUTEC lease payment. And finally, premiums, fees and claims also improved by $17.7 million, owing a $18 million premium on the government’s December US dollar bond offering.”

The Prime Minister added that due to the very trying economic times faced, during the first half of the year, the government sought, where possible, to limit the growth in overall expenditure. As a result, the year- over- year growth in expenditure of $112.1 million at the midpoint of the fiscal year was fueled by the massive increases in funding to support social programmes.

This, he said, has driven expenditure up to $1.41 billion.

“As the economy rebounds and tourism activities resume, we anticipate a significant moderation in expenditure as persons go back to work, and the government begins a slow wind down of its current outlays on social support programmes,” Dr. Minnis told Parliamentarians.

In terms of recurrent expenditure, the Prime Minister noted that outlays grew by $119.5 million to $1.3 billion, which equated to 50.4 percent of the budget.  Adding that key components of recurrent spending include the following:

1. Compensation of employees, which comprises wages, salaries, allowances and NIB contributions, declined to $342.3 million, as the previous midyear tally included the public lump sum payment done in December 2019. The government continued its commitment to reduce the $360 million in arrears it inherited in 2017 and as of December 2020, approximately $282.7 34 million in arrears have been settled since the start of the programme.

2. Subsidies and transfers to non-financial public corporations increased to $205.7 million to support operational costs, in particular, salaries due to COVID-19 economic hardship and to support health and safety measures. These transfers include: a. $117.1 million to the Public Hospitals Authority (PHA), b. $34.8 million to Bahamasair; c. $19.0 million to the National Health Insurance; and d. $15.2 million to the Water and Sewerage Corporation.

3. Transfers to private non-financial corporations increased by $2.7 million to $12.7 million and includes an increase of $5.0 million to independent schools who would have also faced economic hardships due to the COVID-19 economic downturn.

4. Social assistance benefits increased by $91.6 million to $104.4 million compared the same period in the previous year, largely due to increased demand on the government’s social support programs such as the unemployment assistance program managed by NIB, the specially created National Food Distribution Task Force and the Department of Social Services ordinary food assistance program.

Outlining some specific aspects of the budget, Dr. Minnis pointed out that spending of physical infrastructure expanded by $10.1 million to $83.5 million and included works such as: $3.2 million on bridges; $4.5 million on New Providence roads; and $3.1 million on airport repairs and upgrades. He said as a result of those activities, the fiscal deficit widened to $736.1 million, or 55.5 percent of the estimated deficit based on the fiscal year 2020/21 budget.

“To meet its financing need for the year, government GROSS borrowing totaled $2.12 billion million in the first half,” said Prime Minister Minnis.

“The government’s NET borrowing increased by $1.2 billion during the period indicating that the government’s debt to GDP ratio was estimated at 78.8 percent, as at December 31, 2020.

“I must emphasize that there is still great uncertainty in the world, and people in The Bahamas are still experiencing hardship from this unprecedented COVID-19 crisis. However, the Bahamian people can feel assured that this Government is taking care of its citizens and will continue to do so.

“As we look towards a future beyond COVID-19, I am encouraged by the following:

Since the reopening of the tourism economy in November, Government revenues for the months of November, December and January have modestly exceeded our revenue forecasts for those months;

We continue to see progress on substantial investment projects, as highlighted by the ongoing work on the Wynn 46 property in Cable Beach, and the soon to be opened Pointe Property downtown. – The work on the new port development downtown is moving into high gear.

Major hotels, such as the Atlantis property, boast strong advanced bookings. In fact, Atlantis is getting set to reopen its Royal Towers next month.

The Sandals properties in New Providence and in Exuma will also reopen soon.

Cruise lines, such as MSC, have already resumed services in other parts of the world with plans to restore Caribbean sailing in the very near future.

The government continues to make investments and encourage entrepreneurship in untapped business sectors, which will soon begin to bear fruit as we plant seeds to diversify our economy.Debate on the budget is expected to begin when Parliament reconvenes on Monday, March 1st, 2021.

The need for change!