Home Politics KGM proposes ‘a different kind’ of government for 2022 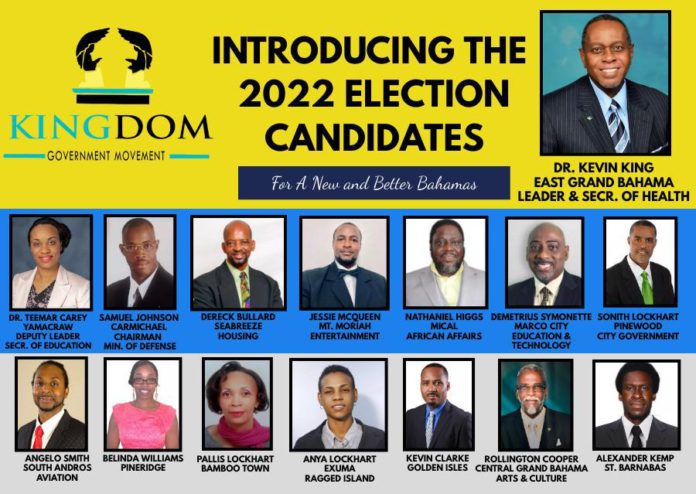 Kingdom Government Movement, one of The Bahamas’ newest political parties formed in the last three years, has initiated its ground campaign and released a slate of candidates it intends to run in its quest to capture enough of the Bahamian electoral votes to win the next general election.

King, a practicing physician who specializes in natural medicine for almost three decades, admits heading the movement was never an ambition of his nor was entering into frontline politics, rather he envisioned himself retiring from the medical profession but has thrown his hat in the race after realizing the country heading in the wrong direction.

“We were witnessing the fastest deterioration of a country in modern times. The cries started to come from every quarter, from every island of the Commonwealth that they don’t feel like they are a part of their country,” he said.

Those cries, he insists have been ongoing for several years along with many unkept promises.

There are many who shy away from frontline politics because they have been brainwashed into thinking that politics is a dirty game, King told The Compass, while adding that the only time the country would become euphoric is during election and afterwards it would go back to business as usual.

He said the Kingdom Government Movement started the arduous process of educating the Bahamian citizenry on why the entire system of government needs to change in order for the nation to obtain economic freedom.

KGM is a different kind of organization from what Bahamians are used to in the political arena, King said, adding that the KGM has introduced a democratic parliamentary republican-type system where the prime minister of the Commonwealth of The Bahamas would now be elected by the citizenry as opposed to becoming the prime minister because he is the leader of a particular party.

“The basic fundamental tenants of that system is the senate being elected by the citizens of the Commonwealth of The Bahamas, as opposed to being appointed by the prime minister,” he said.

“So the Senate will no longer be a rubber stamp of the Commonwealth of The Bahamas, they will be the premier legislative branch and we will have truly for the first time a separation of powers.”

He further explained that the commissioner of police will also be an elected official. There will no longer be a governor-general, rather there will be a president that will be nominated by the citizenry and confirmed by the legislature and the prime minister will no longer have all of the powers that he now exercises.

Kingdom Government Movement also has plans to hold a referendum to replace the Queen as Head of State, remove the Governor-General as a representative of Head of State, remove The Crown symbol from the Commonwealth of The Bahamas and introduce a new symbol and all of the government departments, King said, will be free of political interference.

“We don’t see the two-party system as being the predominant force that it is in the Commonwealth in The Bahamas after 2027,” King said.

While Dr. King is of the belief that both the Free National Movement (FNM) and the Progressive Liberal Party (PLP) which have formed The Bahamas as we know it and have served the country to the best of their ability, they are unable to take the country any further.

“They have reached their mandate. The truth be told, the country is in the worst crisis its been in our modern times and it basically has nothing to do with the disasters or with COVID-19, it has to do with governance and leadership. We’ve been speaking about the void of leadership for the past 25 years and it continues,” he said.

The KGM leader is convinced the Bahamian people were ready for a change since the 2007 general election and have been exchanging government ever since.

“Obviously they have been looking for something that they have not been able to find,” King said, adding that the KGM will accomplish in 10 years what it would take 40 years to do.

He explained that the significance of that is while the country is still experiencing one of the most prolific economic booms since former Prime Minister Sir Lynden Oscar Pindling’s time it would give the KGM led government an opportunity to conduct a serious audit of the country’s finance to see exactly has been going on over all these years without taxing the Bahamian people, without increasing government debt and we will truly be a transparent government.

King said while most political parties today are looking for one thing to build their platform on in order to capture the imagination the Bahamian people, however, the KGM’s national plan is to transform the country, island by island, immediately.

“We have international partners that are ready to go now. If it were possible we will do it now and we will build up the Commonwealth of The Bahamas; we are severely under-populated, this is not sustainable. The vision we have, it might be difficult to actually see what can be done,” the KGM leader said.

“They can marvel at other countries that do it, but in some instances they would be told that it is not possible and it is possible to transform every island in the country, to build new economies, build new cities and people will come.”

King says he makes no apologies for the movement’s name, Kingdom, as it is the name that was given to him.

Pointing out that he is a student of Dr. Myles Munroe who was mandated to take the kingdom message throughout the world, the KGM leader said he was mandated to manifest the kingdom of God in the Commonwealth of The Bahamas as there is no separation of church and state.

“I make no apology whatsoever. We will govern The Bahamas according to our preamble of the Constitution and we will be governed under the supremacy of God, upholding our Christian values and principles. There is no compromising in that regard,” he said.

No matter when the election bell rings, Dr. King said, the KGM will be ready.

KGM is watching, he said, and is aware that the FNM and PLP believe their base is impenetrable because they have the resources and funds to keep them at bay financially, however, that can’t be farther from the truth.

“I can tell you of a certainty, we will have more than enough funding for our campaign and not from any of the usual suspects. That’s why I continue to tell them, and they know that I am their worst nightmare because they don’t know what the Kingdom Government Movement is doing,” Dr. King insisted.

What does the Grand Lucayan sale mean?