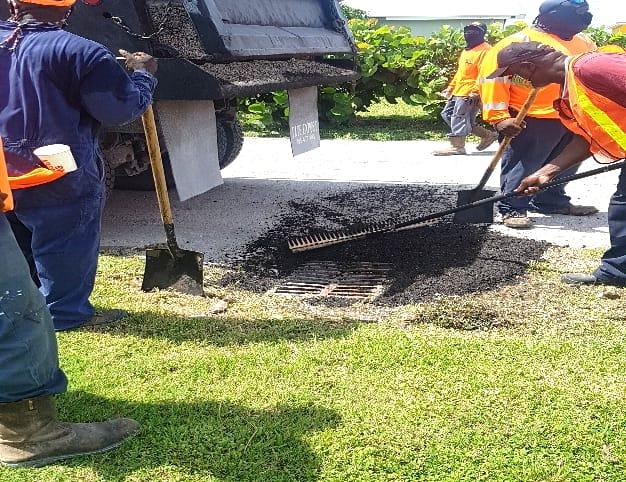 This year, the government will complete the reconstruction of approximately 8 miles of road in
East, Central and West Grand Bahama, these works will comprise hot-mix asphalt at a cost of
$6.1 million.

The Office of the Prime Minister (OPM) Grand Bahama provided information regarding the
recent improvements made throughout various districts in Grand Bahama, namely West Grand
Bahama.

The OPM recently released a statement where great commendation was expressed towards
Members of Parliament, Hon. Iram Lewis and Mrs. Pakesia Parker-Edgecombe as well as
Administrator for West Grand Bahama Mrs. Cristian Palacious and The Ministry of Public
Works for leadership and oversight of recent improvements made in West Grand Bahama.

The Members of Parliament and Administrator for this important work to be done and played a
major role in overseeing the identification of areas that pose immediate danger and hazard to the
motoring public and temporary patching of potholes.

Waugh Construction Bahamas Ltd. was engaged to carry out work and continued to do so during
the COVID-19 Emergency Lockdown order. Their road patching team progressed steadily and
expeditiously throughout the West Grand Bahama District that includes both Central Grand
Bahama and West Grand Bahama & Bimini constituencies.

One of the major infrastructure projects in Grand Bahama that has been completed is the
reconstruction of the Fishing Hole Road Causeway. The Fishing Hole Road Causeway connects
West and East Grand Bahama Island and is the main access route between the West Grand
Bahama communities and Freeport. It was originally built in 1957 to facilitate commercial

development around the Freeport Harbour. Over the years powerful storm surges of past
hurricanes caused large sections of the road to be washed away which created commuting
challenges for motorists.

On Wednesday, May 6th, 2020 Iram Lewis, provided updates on the bridge which was near
completion at the time.

He emphasized that the focus of the bridge’s reconstruction was resiliency.
“We promised to build back better and build back stronger,” he said.

Lewis noted that while it is uncertain that the reconstruction can withstand any force of nature,
he assures that it is much stronger than what previously stood before hurricane Dorian.

The Hon. K Peter Turnquest, Deputy Prime Minister and Minister of Finance expressed that it
the completion of the causeway will enable emergency services and residents to travel much
more efficiently to and from West Grand Bahama.

He mentioned that it will also be beneficial to local commerce because we are going to have to
depend more upon our domestic economy than we are on our guests.

The DPM furthered that the bridge will be the primary artery into Freeport but the service road
will remain in place particularly for vehicles carrying heavy loads, so the main causeway would
not be “overstressed”.

Reportedly the total cost of the causeway’s construction is $9.2 million.

The Making of a Politician: Compassionate, Committed and Charismatic – Glenys Hanna Martin

Whats the skinny on Aragonite?