Home Top Global News Healthcare If Dr. Duane Sands had remembered the past, he would have treaded... 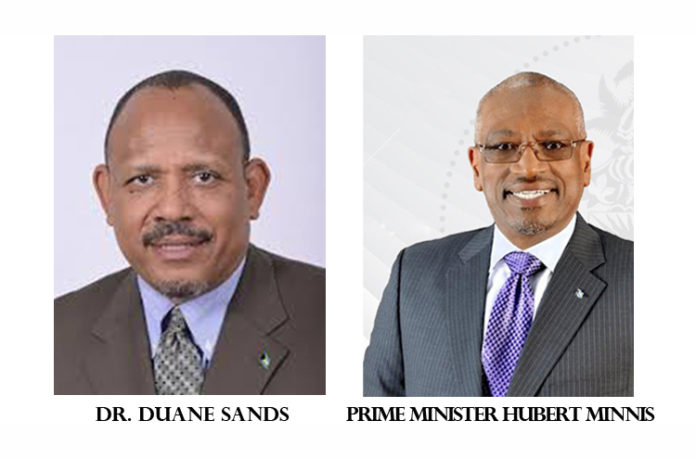 Politicians are like elephants when it comes to remembering those who may have stood against them in the past.

And right now, Dr. Duane Sands will be quick to testify to the authenticity of such a saying. If he had dreamed that over three years ago his affiliation with Loretta Butler-Turner and others from the Free National Movement (FNM) who publicly put forth a vote of “no confidence” in party leader, Dr. Hubert Minnis, would come back to slap him in the face, he may have reconsidered his position at the time.

The sudden resignation of Dr. Sands from Cabinet on Monday, May 4, 2020 was a surprise to many, even to those who in the background were calling for the minister’s resignation. It was an unexpected climax to what had quickly become a major controversy.

According to a Free National Movement (FNM) insider, the saga was supposed to have played out differently, but somewhere along the line, Prime Minister Minnis changed the rules without telling the other side.

“What was supposed to happen was Dr. Sands would offer his resignation and the prime minister would not have accepted it, and eventually, the matter would have played out under the guise of dealing with the current COVID-19 pandemic, or they would have let it fizzle out on its own,” said the FNM source, who spoke to The Compass under the condition of anonymity because of being so close to the situation and the fear of victimization.

“So, the prime minister either changed his mind at the last minute or made his intended move and threw Dr. Sands under the bus.”

Asked why they felt the prime minister would turn on his Health Minister in the middle of a pandemic, the FNM insider noted that it all goes back to the past when Dr. Sands had been a part of a revolt within the party for a vote of “no confidence” in newly elected leader Dr. Minnis.

In 2016, just before the FNM Convention, Sands and Loretta Butler-Turner joined forces and led the small band of FNMs who had sought to overthrow Minnis as the leader of the party, before going into a general election.

The “Forward Together” campaign, which Butler Turner had organized (with Sands as her running mate) had castigated FNM Leader Dr. Minnis and Deputy Leader Peter Turnquest, accusing the two of being “insensitive and out of touch with the issues confronting the Bahamian people.”

It was the second bid for the leadership of the FNM by Butler-Turner, having lost 3-1 in 2014. In her second bid, Mrs. Butler-Turner may have been staring into a crystal ball, when she predicted that Dr. Minnis would likely seek vengeance against her and five other members of Parliament, who had threatened to petition then Governor General, Dame Marguerite Pindling to have Minnis constitutionally removed if he had won the majority of the votes from party delegates.

So, Dr. Sands, here we are. (Although Sands, who was a Senator at the time had resigned his seat)

Butler-Turner and Sands would go on to lose their bid for the leadership of the FNM and Loretta would scamper out of the political limelight, but Sands would throw his support behind Minnis as the party headed into the General election.

Dr. Sands was given the nod for the Elizabeth constituency and won his seat. In fact, the FNM had almost a sweep of the PLP, leaving them with a four-member Opposition. Some were surprised that Minnis appointed Sands Minister of Health, but it was always assumed that he would get the role, considering the fact that Sands is a well-respected doctor.

After the election and the appointment of Ministers, Parliamentary Secretaries, Chairmen of Boards, etc., The Bahamas moved on and the FNM reveled in their victory and set out to govern. Who knew that Sands’ former alliance with Butler-Turner would come back to haunt him, even when it appeared as if all was forgiven?

“No one might say this, but I believe that was payback,” said the FNM source. “This may not have been a making by the prime minister, but he saw the opportunity to pay back Sands for that revolt. This situation, which by the way, was Sands’ own making, came at the right time. The prime minister saw it and made the move to take advantage of the opportunity.

“A lot of people don’t know, but Sands and Minnis never got along. There was always a rift between them. Although, when the prime minister appointed Sands to be the Health Minister, everyone thought they had buried the hatchet. Boy, all I can say is somebody dig that hatchet back up.”

However, there are some in the halls of public opinion who felt that Dr. Sands left Dr. Minnis with no other choice but to accept his resignation. A serious breach was made in the midst of orders that had been put in place by the prime minister to protect Bahamian lives.

Then there were a number of people who had called for Dr. Sands’ resignation after the incident. Many claimed that average Bahamians were hauled before the courts for breaching curfew protocols; some had to pay and some were sent to jail. They felt that Sands should not be above the law. Ultimately, Sands had found himself in the midst of a dilemma.

The controversy? The Health Minister admitted to giving the “okay” for a private plane with six American permanent residents who landed in Nassau last week with COVID-19 testing supplies and were allowed to quarantine at home.

At the same time, there were (and still are) hundreds of Bahamians stuck in the United States, unable to return home because all of the borders are closed as per the Emergency Orders because of the Covid-19 Pandemic.

Once that story broke, the heat began to rise under Sands and it became fodder for all of the talk shows in the nation. During one of the COVID-19 updates, Dr. Sands was asked about the situation and admitted that he made the call because he felt that the swabs which the permanent residents were bringing into the country were really needed.

For a moment, it appeared as if the matter would eventually burn itself out. However, it would be the prime minister himself who would “stoke the fire” under the issue, to stir it up again.

“The situation that happened at the airport was a breach of protocols,” said Prime Minister Minnis. “Initially, it was thought that there were two permanent residents who were aboard the plane, but information that came to me indicate that there were actually six residents on the plane.”

The prime minister’s disinclination to try and defend the move by Dr. Sands was a clear indication that Dr. Sands was on his own in the situation. In fact, Dr. Minnis said during his address that any other word on the matter would come directly from the Minister of Health himself.

The writing was on the wall for Sands.  The Prime Minister was not going to defend him.

“I understand that both Sands and the PM talked and it was agreed that the public outcry over the matter was too much and so they had to make it appear as if something was being done about it,” said the FNM Insider.

“That’s when it is believed that Sands had agreed to tender his resignation and that the PM agreed not to accept it, so that at least it would look as if the effort was made to punish Sands for the breach. But, like I said, something went terribly wrong.”

In a three paragraph release from the Office of the Prime Minister, Dr. Minnis said that he had accepted Dr. Sands’ resignation and he thanked him for his service. One can only wonder if Dr. Sands was as shocked as the public about the brevity of the communication from the OPM.

This is the second time a Cabinet Minister has resigned from the Minnis Administration in the past three years – Brent Symonette resigned over controversy of his financial involvement with the Town Center Mall where the Post Office had been relocated.

There were also two FNM MPs who resigned from the party to become independent – Vaughn Miller and Reece Chipman. With Dr. Sands resigning in the midst of the COVID-19 pandemic, rumblings within the Free National Movement are expressing concern for the party, which was supposed to be in campaign mode.

There are questions of whether or not it was the right time to accept Dr. Sands’ resignation or whether the prime minister should have waited until the pandemic threat had passed before he dealt with Sands’ breech of protocols.

Only time will tell. In the meantime, Dr. Hubert Minnis has taken on temporary responsibilities of the Minister of Health.

Hutchison is folding its hands on GB Airport