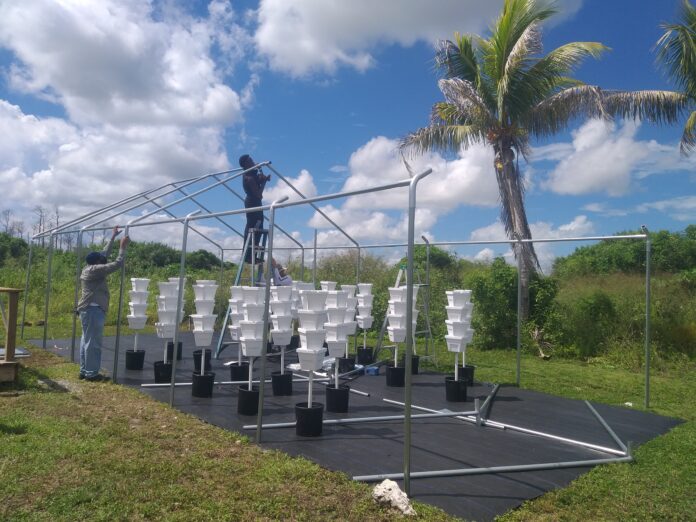 With all of the environmental and economic challenges the Bahamas, specifically Grand Bahama has faced many residents are seeking innovative ways to earn a living utilizing sustainable practices.

This is highlighted in the local agricultural industry which is responsible for a portion of our own food supply. One of the methods Bahamian farmers are investing in is hydroponics. Hydroponics is defined as the growing of plants in nutrient solutions with or without an inert medium such as soil to provide mechanical support.

The main advantage of Hydroponics, also known as aquaculture or tank farming, is the savings from reduced labor costs, because it is typically carried on in enclosed areas and the irrigation and fertilizing are done mechanically.

According to Caribbean Hydroponics this practice has an array of benefits such as; it uses up to 90 percent less land to grow equal amounts of produce when compared to traditional farming, conserves water using approximately 10 percent of the water that would be required if growing in soil.  It uses 60 percent less fertilizer and crops have superior taste with up to 50 percent more vitamin content of certain vitamins such as A, B and C complex and C than conventionally grown crops

Hyrdoponics is also known as a “clean” method because soil is not needed.  Growth is 30-50 percent faster than soil under the same conditions

Hydroponics also allows for more effective use of biological control agents and organic pesticides (IPM).  There is year round availability of fresh healthy food with all the vitamin benefits which are lost when food is shipped or held in storage and it requires less labor and much less space to grow the crops.  Another benefit is that farmers do not have to worry about weeds.

To this end, the Ministry of Agriculture hosted a special workshop on Saturday, September 26th, 2020 on hydroponics training from 8:30 am to 1 pm at Berkshire Farm in Freeport Ridge Estate, off the Grand Bahama Highway.

Jeri Kelly, Agricultural Program Officer, Ministry of Agriculture and Marine Resources spoke about the new program during an interview in Saturday, September 26th, 2020.

She stated that the workshop, which is a training portion of the Hydroponics Program took place earlier that day.

Kelly explained that the program was created as a part of the Emergency Food Plan established response to the COVID-19 pandemic.

“Its one of Minister Pintard’s initiatives coming into office to ensure that we have more climate smart agricultural technologies within the Bahamas,” she said.

She furthered that the program introduced protected agriculture with the use of hydroponics. A part of this initiative is outfitting participating farms with hydroponic green houses. This would assist farmers in extending their crop season and in the event of hurricanes like the category five Dorian of 2019, farms would be able to easily dismantle it.

Kelly informed that the day was the beginning of a series of training.

“First you are showing persons how to set up the green houses and then after that we will go on to irrigation of the hydroponic systems, the planting the, growing fertilization and harvesting,” she said.

Systems usually take up to a full day to complete.

She added that about 20-25 agricultural entrepreneurs participated in the workshop that day.

“In the program itself,  its national, we have nine participating islands; Grand Bahama, Abaco, Nassau, Andros, Exuma, Cat Island, Long Island and San Salvador,” she said.

The year long program has a total of 86 participants and 100 hydroponics systems.

She went on to discuss the significance of such a program.

“You can grow all year round, and you can grow various varieties as well as reduce pests because it isn’t in the soil for soil born pests,” she said.

She added that this particular model also makes harvesting easier.

“You can stand up and pick whatever you need to get, so you don’t have that weed situation, so all of that is avoided,” she said.

Kelly furthered that introducing programs such as this one emphasizes the importance of the country’s ability to feed itself.

“What it does is ensures that the household has healthy nutritious food as well as any surplus can be sold to local communities,” she said.

He stated that Glenn Kelly of Abaco was also there to assist in assembling the green house on the farm that day. They also brought various seeds with them as well as a camera to capture the application for future reference within the program.

“They’re assisting quite a bit,” he said.

He added that his main goal for this new system is achieving food security and sustainability.

“Being able to feed ourselves, so of course we’ll establish that first, then of course as we expand we’ll tap into the local market and establish some tomatoes and leafy greens. The government is also assisting us with getting some seeds and to carry us through I think they will be assisting us for about a year,” he said.

Giving to those in need amid Covid-19

What is a PH diet?