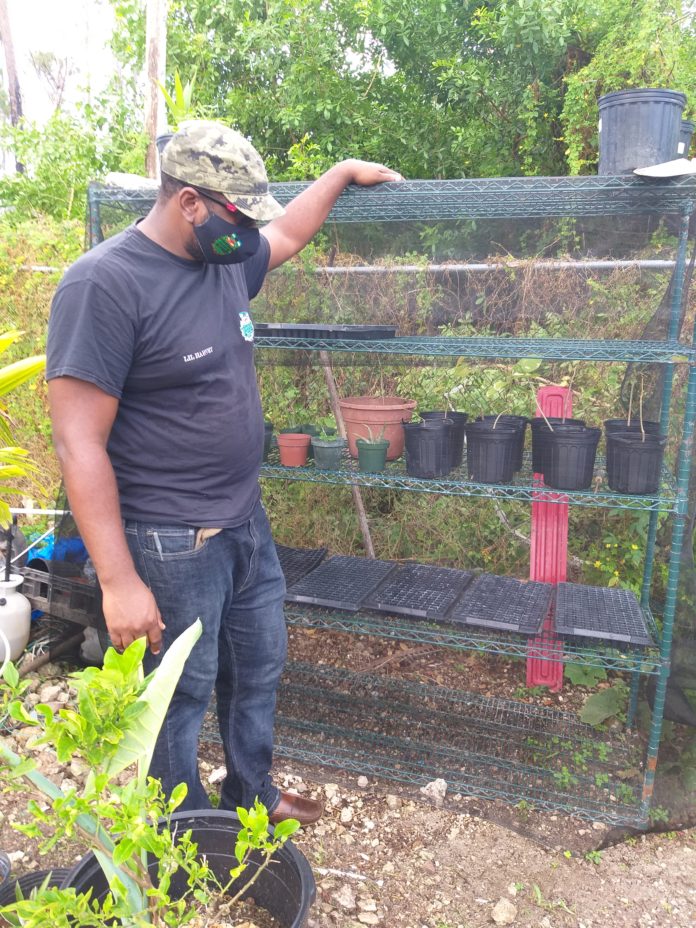 Capsicum Annum better known as the pepper is a staple ingredient in Bahamian cuisine providing bold flavors for some of our favorite savory dishes.  It spices up freshly chopped conch salad, crab and rice, and is often used to help season the fried chicken and fish many Bahamians cannot seem to get enough of.

This small but potent and savory fruit can be found in a variety of colors, shapes and sizes in most if not all grocery stores.  They can also be found on farms located right here on Grand Bahama.

The Green Life Pepper Farm is one them and they are continuing supply the island and beyond with their spicy homegrown produce.  Grand Bahama farmer and Proprietor of Green Life Pepper Farm, Harvey Woodside recently sat down for an interview at their location about their operations both pre and post COVID-19 and more.

Woodside stated that the farm, which has been operating for about five (5) years now, specializes in growing a variety of peppers.  They produce the fruit on a commercial scale, selling to store owners, residents and more, including off-island customers.

“We chose the pepper line because we’ve seen a great demand for the product,” he said.

Woodside noted that he also has a great love for peppers, which prompted the establishment of the farm.

He furthered that as a child people often told him that he possessed a “special thumb”.

“And as a result of that I developed that thumb and was persistent with working with it a few years down the road I decided to work in agriculture full time and I developed a company,” he said.

Woodside added that he had no doubts about entering the agricultural industry.

He went on to describe the types of peppers that could be found on the farm.

Woodside revealed that they also see a need to start producing what they call “classier peppers” which are bell peppers, also locally knows as the sweet pepper.

Noting that they too are a part of the pepper family, except they do not possess the spicy taste commonly associated with peppers.

Woodside also informed that the farm has created products based on peppers.

“As we speak, we have an all-natural pepper sauce and also we have a seasoning, a seafood seasoning, we call it. It goes with any type of seafood, fish, conch, lobster, and shrimp, etcetera…the pepper seasoning that produce brings a super flavor to it,” he said.

He revealed that the new products are well received and have been in high demand for the past two weeks.

According to the farmer, one customer recently ordered 30 bottles of the pepper sauce.

Green Life Pepper Farms is also in the process of expanding physically with a seven (7) acre property in East Grand Bahama.

“We’re just praying for an inactive hurricane season,” he said.

Woodside reflected on the category five storm, Hurricane Dorian that ravaged Grand Bahama after causing mass destruction on the neighboring island of Abaco in early September 2019.

Although Dorian affected many areas of the island, arguably its most devastating effect was on the Eastern side of the island.

Woodside stated that Dorian presented a major setback for their operations out East.

“We were approximately four and a half weeks away from harvesting from our farm out east and then Dorian happened,” he said.

He furthered that it took over three years to get their Eastern farm location to where they did right before Dorian.

Since that period, Green Life Pepper Farm are starting to get back on track with their operations schedule, and according to Woodside they also implemented essential plans to deal with potential natural disasters.

“We have put in place crises management where we would not be in a stagnant position after a storm anymore. We would be ready to jump up and go again. So we out together a few key strategies to help us get over those humps,” he said.

Now, like many other local businesses the farm is facing with the ongoing COVID-19 pandemic, which they are finding ways to cope with and function in spite of.

“When it’s all said and done, Green Life Pepper Farm will have a resiliency and a crisis management strategy to bounce back from anything,” he said.

With the pandemic having such an incredible impact on the national and global economy, the landscape of top industries like Tourism may take a shift and force the Bahamas to focus on other industries like Agriculture.

To this end, Woodside took the opportunity to give his take on the matter.

He shared that before starting Green Life Pepper Farm he was employed in the Tourism Industry as a restaurant manager.

“As a result of that I saw a tremendous need in the agriculture sector because I worked hand in hand with the chefs, etcetera, purchasing different produce and I saw the volume of stuff that we were purchasing internationally and how consistently,” he said.

Woodside expressed that with this knowledge he came to the realization that if that restaurant was purchasing such large quantities of international products, many other probably were and are too.

This encouraged him to pursue his agricultural endeavors because ultimately he noted that it would make a positive impact on the community.

“Agriculture then became not only a love but it became a way of life, because the vision that it gave me, it helped me see beyond my eyesight…It showed me that hey we are onto something, we are on the path, continue to make it work,” he said.

He encouraged others who also have a passion for agriculture to adopt a similar attitude.

“Me one, cannot do it alone,” he said. “This is a very lucrative business and the demand is there.  If your look around Grand Bahama itself, and I’m talking about no other island that Grand Bahama. If you look around and see the amount of imports we have on produce it will blow your mind,” he said.

Like he deduced as a restaurant manager, Woodside explained that if one company can spend $1 million to accommodate their stores if half of that money remains right here on Grand Bahama it would begin to turn the economical struggles currently plaguing the island.

“The more consistent you are with producing you would see significant changes, not only in your pockets but with the island, because then you start to hire more people, you start to help people live a little more healthier because we’re not taking the rejects of any other country. We’re taking the freshest, the most vibrant looking, healthiest produce you have to offer,” he said.

Woodside concluded that the people of Grand Bahama should stay tuned as there is more to come from Green Life Pepper Farm. For those interested in contacting them, they can be found on Instagram at @greenlifepepper.

Is Swift Justice Working in The Bahamas?