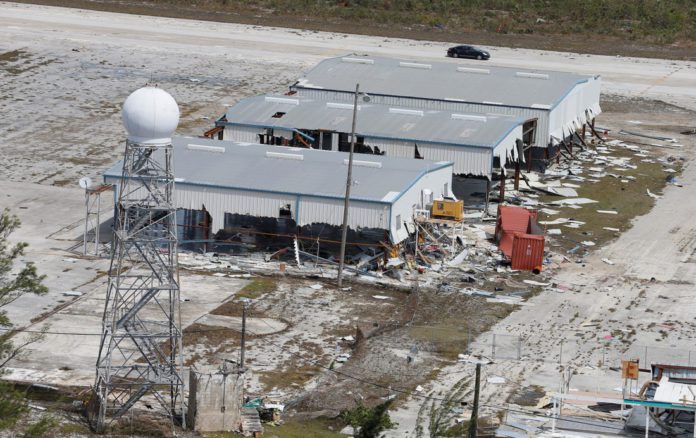 The move came on Wednesday, when the government tabled the Airport Authority Amendment Bill, 2021 in the House of Assembly. The Bill seeks to make a number of amendments to the original Act, to provide for the acquisition, management and control of the Grand Bahama International Airport (GBIA).

But the move may also put a strain in the relationship between the Grand Bahama Port Authority and the Government. The two had been in negotiations for months in an effort to find some “common ground” and come up with an amicable solution to the problem of GB’s dormant airport. However, it appeared as if all talks had been fruitless.

The Principal owners in the airport, Hutchison Port Holdings Limited was not shy in expressing their stand on not willing to take on the task of redeveloping the GBIA. It was that firm statement, which made the Government move in to try and negotiate some term of agreement.

Both the International and domestic airports were destroyed in the wake of Hurricane Dorian. The sights of airplanes strewn all over the field, airstrip and even on the streets that led to the airport, along with a domestic building that was severely damaged, a private hanger that was torn all the way through and an international building that was flooded up to the roofs, are forever etched into the minds of Grand Bahamians who lived through that ordeal.

It has been over a year since Hurricane Dorian blew through Abaco and Grand Bahama, yet signs of what happened on that fateful day are still evident.

Grand Bahamians have been wary about a lack of forward movement they have not seen since Dorian in 2019. Minister of State for Grand Bahama, as well as visiting government officials, have all said that the government was in talks with the Grand Bahama Port Authority (part owners of the airport) to decide what to do with the facility.

Even before those meetings began, Hutchison Whampoa had indicated that they had “no interest in doing anything with the airport”. Yet, negotiations between the government and GBPA continued. Portions of the private airport was renovated and is presently being used to welcome international and domestic flights.

Now, with the passage of the new Amendment, the Government will have the authority to take control of the deserted airport.

The Bill, which was tabled by Marco City MP, Michael Pintard, states in part; “for the avoidance of doubt, the GBIA shall remain a part of the Port area and therefore the authority shall be entitled to all benefits and liable to obligations as if it were a licensee of the Port.”

That means that all fees for environmental and building permits be no less favorable than the other licenses held by the Grand Bahama Port Authority.

The move could mark a victory for the government, but mostly for Grand Bahamians, although no figures were given on how much it’s going to cost the government to obtain the GBIA airport. The Amendment is historic in its own way.

“So, now that the Bill has been tabled, when it’s passed, it will allow the government to purchase the airport in Grand Bahama.”

Since the government purchased the Grand Lucayan Resort, focus on increasing air traffic at the airport was among the many considerations upon purchase of the hotel. And that was before Hurricane Dorian. In fact, plans were being put in place to try and reduce the fees at GBIA in an effort to attract more flights to the island.

Once negotiations with GBPA hit a stalemate, the Government knew that it had to go a different route in order to make something happen at the airport, a major point of entry on the island. Covid-19 had hampered and slowed the negotiation efforts, but there were still attempts to come to some sort of agreement.

The Department of Aviation will facilitate the transition of the GB airport to the Government of the Bahamas and will also manage the redevelopment process.

The government is obviously serious about pushing the Bill through to passing it as quickly as possible. It has already been passed to the Senate and laid on the table in the Upper chamber on Thursday. It was introduced to the Senate by Attorney General Carl Bethel, who said that the Bill was necessary to begin the rebuild of the GB airport.

“This Bill will allow the government to purchase the airport from Hutchison and the Grand Bahama Port Authority and then engage third party entities to thoroughly renovate that airport,” Bethel said in the Senate on Thursday.

“The runway has to be raised, the whole terminal area has to be on a raised platform, at least ten feet high. It’s going to be a major investment and there has to be a lot of configurations to make the airport feasible,” Bethel said in the Senate.

In an effort to get a feel from Grand Bahamians on their take about the new Amendment and the tabling of the Bill, the Compass spoke to a number of Grand Bahamian residents. Many did not even know such a Bill was tabled in Parliament and had no idea what any of it would mean for the island.

Those who did “hear something” about the Amendment saw it as a “political ploy” and not something that was certain.

“To me, it’s just another political talk,” said a female sales clerk, who wanted to be called ‘Muffin’. “It’s been over a year and that airport has just been sitting there. Every time I have to pass there, it makes me angry to drive pass that airport and see the condition it’s in. It’s like nothing has happened since the hurricane.”

Steven Clark, who says he’s a handyman, saw the tabling of the Bill as just another means by the government to give people false hope. He’s not convinced that anything will happen with the airport any time soon.

Janice, another person we spoke with simply said “This sounds like campaigning to me. I have to see it to believe it.”

Overall, the main question that some people are asking is, when will Grand Bahamians see any progress in the renovation and redevelopment of the Grand Bahama International and Domestic terminals? The move may be seen by the Government as a way to circumvent both the GBPA and Hutchison Holdings Limited.

Welcome to the Age of digital discipline

Political Parties Have Cranked Up the Social Media Propaganda Machine