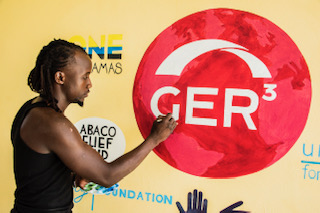 ABACO, The Bahamas — For some, the road to recovery a year after Hurricane Dorian has  been a hard fought one, wrought with tears, heartache, mixed emotions and bitter-sweet  memories. But it is the generosity of relief organizations like Global Emergency Relief  Recovery and Reconstruction (GER3) that have helped to make the last year for residents in  Grand Bahama and Abaco bearable.

“It was like God had GER3 waiting for me,” said Sitha Silien, 28, who lived in an area in Marsh  Harbour, Abaco, known as ThePea.

She lost her mother, 54, and brother, 25, in the hurricane and remembers that day when she and  her family had to flee for their lives as if it was yesterday. She thought she had lost her father,  too, who was separated from them for hours, but later learned that he was battered, but alive.

She and her three-year-old nephew made it through the storm. Her brother, who was  determined to find their father, wasn’t so fortunate. She still remembers his last words as he  handed over his son to her before running off into the storm.

After a desperate attempt to leave Abaco over the next few days, Sitha, her father and nephew  were finally successful as were so many others who were taken into New Providence to a  shelter, but after a while she was determined to go back home to rebuild her life.

But the community in which she grew up was no more. It had been decimated.

She returned on January 3, anxious to find work and, after picking up work doing a few odds  and ends over the next three and a half weeks, she learned about the restoration work GER3 was doing at the Central Abaco Primary School, made her way down there and was instantly hired.

“That was since the first week in February,” Sitha said, adding that she has gained a wealth of  knowledge in the construction field having started out removing debris on campus and moving  up the ranks to pitching roofs.

“I could tell you that I learned so much and I appreciate the work,” she said.

In fact, Sitha has managed to save up enough money to rent an apartment and purchase a  vehicle and credits it all to GER3.

Founded by Langdon Greenhalgh in 2017 with a mission to help crisis-affected people after  disasters build back better, GER3, which is headquartered in Winchester, Virginia, was one of  the first aid groups on the ground in Grand Bahama just days after Dorian passed.

The monster storm destroyed the eastern end of Grand Bahama, compromised thousands of rooftops  and left hundreds of families displaced or homeless.

GER3 International Program Coordinator Margaret Bacon said the idea is to get into the  disaster area immediately after any sort of global emergency, be it a hurricane or earthquake.

“The idea is getting in there for the immediate relief phase: removing debris and making sure  people are safe. Then transitioning into rehabilitation work: muck-and-gut, mold remediation,  debris management and longer term repairs, focusing on homes, schools and health facilities,” she said.

The GER3 team then assists with moving to the recovery and reconstruction phases and seeing  it all waythrough.

Bacon explained that GER3 is a small organization that is primarily volunteer led. Its vision is to  bridge the gap between relief and recovery work once the immediate relief organizations leave,  building back more resilient structures and communities so that they are better suited for future emergencies.

Rather than bringing in a lot of international resources, personnel and equipment, Bacon said its  really about getting into the community with a small international team that can provide the  right expertise to get things going while simultaneously building a local team, using local  suppliers and figuring out with that team what the community needs and focusing on that.

In Grand Bahama, GER3 built a local team to help rebuild over 50 homes, 12 apartments, six  local businesses and two schools in East Grand Bahama. The Housing rehabilitation project was funded by the Center for Disaster Philanthropy.

Many of the residents who lost their homes and a number of the homeowners joined the GER3 team with its Cash for Workers Program and were paid daily to help with debris removal and  rehabilitation work.

The program helped to provide locals with income and skills they may not have had before.  Now that the program is complete, they are able to perform mold remediation work or home repairs and take those skills to perform work on their own homes or market themselves for  future employment.

The four-member GER3 team, which consists of two project managers, one program director  and Bacon stayed in Grand Bahama until December before turning their sites on Abaco where  they have mounted a number of projects.

Bacon noted that the duration of GER3’s stay largely depends on the need and funding.

“We’ve been really grateful in The Bahamas that many donors have been interested in our  work and appreciate all the things that we are doing. It’s been basically one project after  another,” she said. “We started with the schools and homes in Grand Bahama. UNICEF was supporting us there and then they said, look we’re really happy with what you are doing and we want you to see if you can do the same kind of work in Abaco.”

When they transitioned over to Abaco, GER3 began focusing on Central Abaco Primary School.  A range of donors contributed to the substantial rehabilitation project led by GER3, including  the Lyford Cay Foundations, One Bahamas Fund, Discovery Land Company Foundation, and  Sandals Foundation. The team is also working on homes for teachers and social workers. The  work on Abaco was expanded to another school, Every Child Counts (ECC), a special needs school in Marsh Harbour and rehabilitation work on three hurricane shelters (in Treasure Cay, Guana Cay and Man-O-War Cay) and 15 additional homes.

“This is what GER3 was founded to do and we’re really excited about this. It’s been an opportunity for usto stay and really get into the work that we were hoping to do,” Bacon said.

All of the projects are set to end in December or January.

“Depending on what other work needs to be done, I know that there is still a lot that needs to be  done. We might be staying on longer if we feel like we can help and if there is donor support for  that,” Bacon said.

At last count, there were between 30-50 daily workers, along with a wide range of local  contractors for the different repairs.

The team has been fortunate to be able to stay in Abaco and work through the COVID-19  pandemic, unlike some of the other aid response organizations, and they continue to receive  remote support from team members back in the United States.

Rochelle Russell, a teacher and administrator at Central Abaco Primary School, was in the  United States with her husband and two sons during Dorian but had returned three months  ago to begin the restoration process of their home.

She said knowing what her family, friends and colleagues were going through back home while  they were so far removed and hearing of the horror stories and the lives that were lost was heart  wrenching.

Looking at the photos, Russell said they knew the situation was dire, however, it still couldn’t  prepare them for what they met when they returned home after the storm.

She’s overjoyed with the work GER3 is doing on the island and all of the lives they have  touched.

“It’s indescribable. Words cannot describe the feeling. Just to see all of the restoration effort  and all of the hard work that they have put in, you just can’t thank them enough. It means a lot  to the educators, but it also means a lot to the parents and students who can return as soon as the okay is given for face-to-face instruction,” she said.

GER3 has been a great blessing, Russell said.

“A big heart-felt thank you. They have been a Godsend. They have not only helped restore the  school, but they have also helped persons restore their homes and come in and helped us to see  if we could try to bring our lives back to some state of normalcy,” she said.

“They have been more than generous, and you can feel the love and support — not only in a  financial way, but also emotionally and mentally in assisting the process to move alone  smoothly.”

Proprietor, Pastor, Philanthropist :The Making of a Politician: Darren Cooper

The ever present battle : Electricity costs in Grand Bahama

McAlpine’s ‘Pinocchio’ comment could be last straw for FNM party