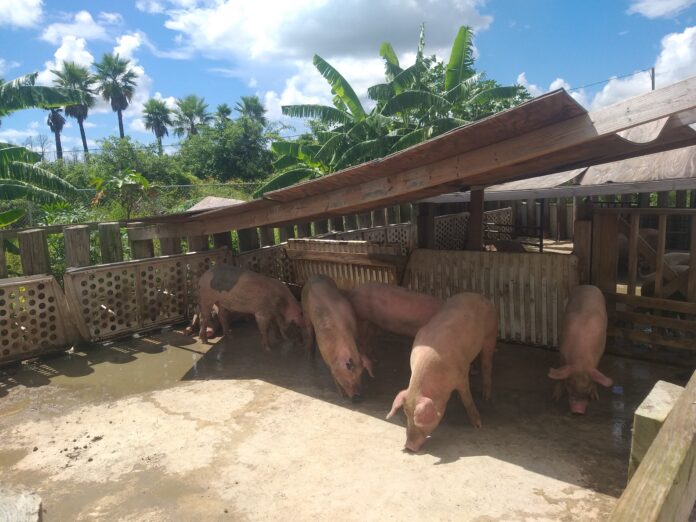 Roberts, 29, shared his journey to becoming a pig farmer along with the economic benefits of agriculture on the island during a recent interview.

He informed that his farm focuses on raising and harvesting pigs and revealed the origins of the name, explaining that it derives from the Berkshire pork.

“The name derived from the Berkshire pig, that’s the highest quality pork,” he said.

Roberts added that he became inspired to become a farmer after traveling to Exuma last year where he spent time with his uncle and mentor Kenneth Bowe who own a local restaurant there.

According to Roberts every Sunday Bowe would organize a pig roast.

“I saw that he had a farm, so he raises his own pigs for his pig roast, so he does farm to table and while I was there just taking notes, it just made sense,” he said.

Roberts added that during this process of note-taking and extensive research discovered that in the Bahamas about $80 million is spent on importing pork alone.

He furthered that through communicating with longtime farmers like Burt Duncanson, he also found that many of them want to leave the knowledge they have acquired with decades of farming experience with the younger generations of Bahamians.

Roberts expressed that this helped to motivate him into continuing to pursue having his own farm.

“They gave me a lot of advice and I ended up connecting with the key people to get started,” he said.

He added that to date Berkshire Bahamas Farms has over 50 pigs and are ready to harvest.

Roberts noted that more Bahamians can participate and invest in farming, expressing that it is extremely important for young Bahamians to seriously consider a career in the agriculture industry in the Bahamas.

“It’s extremely important just from a sustainable aspect,” he said.

He expressed that being more sustainable as an island and by extension a country would eliminate the need for a long shipping process and any risk that comes with that.

Roberts revealed that when conducting market research with local stores, he discussed how buyers often receive meat products like pork, that are stamped with ‘Export Only’, which speaks to it being a lower quality product.

“When they ship it out they’re keeping the better product there,” he said.

He furthered that the quarantine process of importing pork, is also extensive, therefore the stages between slaughter to shelf.

Roberts also expressed that from a financial standpoint, it is a boost for the local economy.

He furthered that getting other local farmers involved to form a cooperative would increase chances of success for the agriculture industry in Grand Bahama.

This cooperative would be a partnership that facilitates many aspects of farming such as marketing, supply and demand and more.

Roberts revealed that since the farm’s establishment it has made significant strides, despite the pandemic.  Some of which were helped by the Government’s agricultural initiatives.  One of the things they assisted him with was providing the farm with 21 free range chickens, which he is already reaping the benefits of.

“One of the hens just started laying on Monday, so we’re getting one egg per day from her now and hopefully the others follow suit very shortly,” he said.

They have kept moving forward with the setting up infrastructure on the farm among other things.

He added that once they have a firm foundation with their infrastructure everything else will fall into place.

Roberts noted that they still want to continue with their community service programs which were established post-Dorian and pre pandemic with local high school students.

“The high school students usually come out on Saturday mornings, get a few hours in and learn something,” he said.

He noted that this may be perfect timing for this. Roberts told this daily that since its inception, he wanted the farm to be a community based business. To this end they connected with other local farms and formed important ties with local schools through a community service project initiative.

Students assist on the farm on Saturdays in exchange for community service hours and work experience.

“We have high school students from Sunland, they come out every Saturday and they work on the farm, feed the pigs, they learn, they do composting, they also start planting some crops,” he said.

He added that on Saturday, February 29th, 2020 sixth grade students from Freeport Bible School visited the farm and seemed to have a really good time.

“Some of the kids started to pretend like they were working on the farm and they catch on pretty quickly,” he said.

Roberts suggested that more agricultural subjects should be implemented in the education system so that children can understand how to be more sustainable.

Roberts then stated that he hopes to start a farming summer camp along with other initiatives once everything has settled.

He also expressed plans to continue with the farms Pig Roast which will serve as a product launch as well as a charity event.

The event itself would be free, but meal tickets at available for $20, meals would include mouthwatering roasted pulled pork, Bahamian styled peas n’ rice, cheesy macaroni and coleslaw.

The event will also feature booths from various local vendors.

“We’re pushing for other vendors to come out sell their product,” he said.

He added that vendors would only have to pay a fee for their booth.

Individuals and families alike can come and enjoy what Grand Bahama has to offer, including drinks, food, a bouncing castle, an inflatable slide, games, face painting and more.

Part of the event’s proceeds from the roast’s meal tickets would go towards hurricane relief at the Grand Bahama Children’s Home (GBCH) which was devastated during hurricane Dorian in early September 2019.

Children from the home were displaced after the storm while renovations were made and now Roberts and his team intend to celebrate their return with the Grand Bahama community.

This cause is particularly personal to Roberts.

“My family has been involved with the Grand Bahama Children’s Home Committee since its inception and at this point we want to launch our product and we see this as a good time to try to bring the community together,” he said.

The controversy surrounding the naming of Roland Symonette as a National Hero goes beyond...