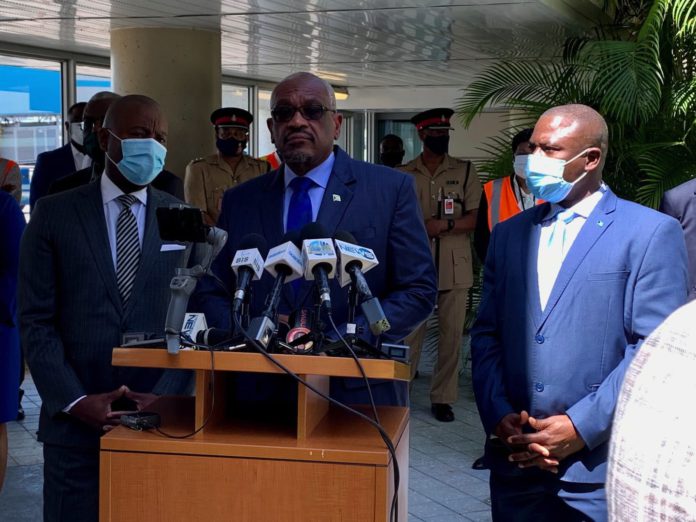 NASSAU, The Bahamas — Prime Minister the Most Hon. Dr. Hubert Minnis,  the Hon. Renward Wells, Minister of Health, and other officials received the  first batch of AstraZeneca vaccine – also known as Covishield — at the  Lynden Pindling International Airport.

The 20,000 doses are a gift from the Government of India, as was  confirmed by the Prime Minister in his National Address on Sunday, March  7, 2021.

The vaccines were pre-qualified by the World Health Organization (WHO)  and received Emergency Use Listing (EUL) approval by the WHO. The  vaccines have also received certification from the Caribbean Regulatory  System (CRS).

The vaccines are to be stored at the National Immunization Cold Storage  Facility in New Providence and transferred to other islands as required.

The facility has the capacity to safely store hundreds of thousands of  vaccines. To ensure maximum security, facility will be under 24-hour guard  by the Royal Bahamas Defence Force.

The Prime Minister had said that those eligible to receive first doses will be healthcare workers in the public and private sectors, residents and staff of  eldercare homes and non-ambulatory residents registered in the public  health system. (BIS Photos/Kristaan Ingraham)

Excuse me, can you give me six feet, please?

Local Businesses warned to “do their homework” on WTO and prepare themselves.

Crime and Justice in The Bahamas

From inspiration to creation