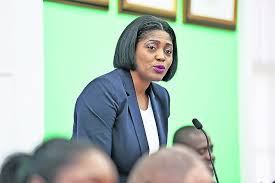 On Tuesday, March 2, 2021, the Cabinet Office announced the appointment of Mrs. Pakesia Parker-Edgecombe as Minister of State for Disaster Preparedness, Management and Reconstruction. A position that was recently held by the newly appointed Minister of Youth, Sports and Culture, Hon. Iram Lewis.

Mrs. Edgecombe served as the Parliamentary Secretary in the Office of the Prime Minister, with responsibility for Communications.

According to sources within the Free National Movement, the announcement came as a surprise, especially after a number of questions were asked about who would take over the Ministry of Disaster Preparedness, following Lewis’ departure.

A number of guesses and insinuations were thrown around, but, according to sources, Mrs. Edgecombe’s name had never come up.

“Pakesia is one of those quiet, laid back people who you feel should not be in politics, because they’re too nice to play this dirty game,” said one of our FNM sources. “Mind you, I’m not saying that she’s not capable, but a lot of people feel that she’s just…too nice to be in politics. Traditionally, unless you’re one of those cut-throat kind of people, it’s hard to survive in Bahamian politics.

“But I guess the Prime Minister saw something in her that made him give her the position at the Ministry of Disaster.”

“They frustrated her,” our source added. “Like I said, politics is a cut-throat business and while there were things she wanted to do, moves she wanted to make, when you have those above you who’re telling you not to make those moves or not to rock the boat, it leaves your hands tied. She tried, but when you’re a rookie, sometimes you have to just sit small.”

On the other hand, some insists that Edgecombe was involved and carried out her duties as best she could as the Parliamentary Secretary. They also noted that she has been working hard and diligently within her constituencies – namely West End and Bimini – ever since she was elected in 2016, after beating out the incumbent, Obie Wilchcombe.

She was recently nominated by the FNM to contest that seat again in the upcoming general elections.

The recent allegations of Edgecombe propositioning the Chairman of the Progressive Liberal Party (PLP) to join their party went viral and stirred up a lot of emotions. There was rumors that the West End MP had told Fred Mitchell that she was willing to cross the floor to their party, if they could guarantee that she would get the nomination for West End and Bimini.

Mrs. Edgecombe denied those allegations, claiming that the PLP was “grasping for straws and trying to muddy the waters with their venom and fat-fetched stories”.

Not just moved on, but he has seen fit to give her a promotion.

However, according to another source within the party, the move by the Prime Minister was to try and replace a female within the Cabinet, which was left vacant by former Youth, Sports and Culture Minister, Lanisha Rolle, who was the only female within the Minnis Administration’s Cabinet.

“From what I can see, the PM is probably trying to remedy that situation, particularly after there was so much ruckus made about it,” said the Compass’ source. “When you have a lot of women’s rights movements and organizations crying shame on the Prime Minister for firstly having only one female presence in the Cabinet, and then not having any, it carries some weight.

“The PM knows just how much votes the female votes carry and so he made a strategic move and appointed a female to take over the Ministry of Disaster Preparedness. There were not that many he had to choose from, but I also believe that with the appointment of other MPs from Grand Bahama, maybe he’s trying to send a message of how much Grand Bahama will play in the upcoming elections. It’s just my thinking.”

The Prime Minister had said at the beginning of his tenure that Grand Bahama would play a pivotal role in his government and now it seems to be coming to past.

Mrs. Pakesia Parker-Edgecombe became popular as a news anchor on ZNS News in Freeport. She was first admonished to run in politics by former FNM Prime Minister, Hubert Ingraham. She had lost the seat she first contended for, and had reportedly stated that she was not going to get involved in politics again.

However, she was convinced to give it a shot again by Dr. Minnis. It was a good decision by both Minnis and Edgecombe, after she came out with a victory in West Grand Bahama and Bimini.

The Prime Minister said that Mrs. Edgecombe’s appointment will become effective once she is sworn in as the new Minister of State for Disaster Preparedness, Management and Reconstruction.

The mystery behind your breakthrough