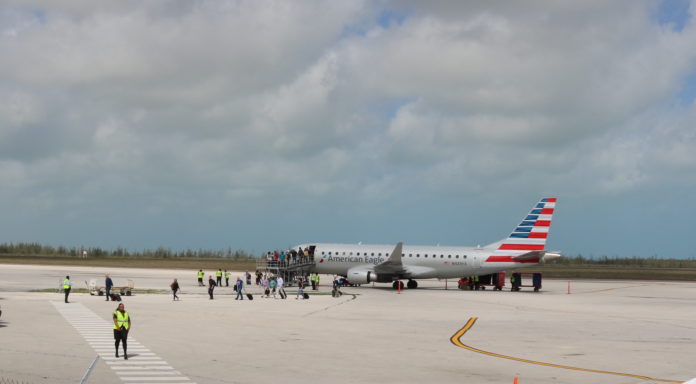 FREEPORT, Grand Bahama — American Airlines has relaunched its flight service to Grand Bahama, providing daily flights between Freeport and Miami, Florida. The airline officially resumed travel to the island on Thursday, February 13 with the arrival of an E175 jet to Grand Bahama International Airport at the Fixed Based Operator (FBO). The capacity flight brought in 76 passengers.

Passengers aboard the international flight received a warm welcome Thursday morning, courtesy of the Bahamas Ministry of Tourism & Aviation (BMOTA) and Grand Bahama Island Tourism Board. The organizations partnered to give the visitors a true Bahamian welcome, which included a junkanoo performance and complimentary Bahamas Goombay Punch soda.

American Airlines is the fourth airline to relaunch commercial international flights to Grand Bahama since Hurricane Dorian. Bahamasair returned first with a special flight from Tri-Cities Regional Airport in Tennessee on November 26, 2019. The national carrier later resumed regular service between South Florida and Grand Bahama on December 16, 2019 with a Fort Lauderdale route, which runs daily except on Tuesdays and Wednesdays. Sunwing Airlines returned on December 14, 2019 connecting Grand Bahama to gateways in Toronto and Montreal, and Silver Airways relaunched its service between Freeport and Fort Lauderdale on December 19, 2019.

“We are happy to report that stop-over arrivals on all of these flights have been solid, which is a good indication that Grand Bahama is still rocking,” Steven Johnson, BMOTA general manager for Grand Bahama, said. “The addition of this American Airlines flight will only add to the visitor numbers we’ve been enjoying. So, we’re really excited about the official return of American Airlines. This is not only going to connect us to a wider network of travelers, but it also offers Grand Bahamians more travel options and convenience.”

Johnson revealed that Grand Bahama can expect even more international arrivals in the summer months as Italy-based tour company Alpitour will operate direct flights between Milan and Freeport from June 4 to August 27 via Blue Panorama Airlines.

The mystery behind your breakthrough